But this is NOT the Gospel of Jesus Christ.

The Gospel of Jesus Christ is not some vague metaphysical archetype as described by Carrey; rather Jesus Christ is THE ONLY WAY of salvation, not simply a model of it.  This Youth Pastor wondered out loud why the mainstream media and Christian media had not made Carrey’s gospel proclamation more well-known, he for one was super excited about this message, sharing it to all who would listen. 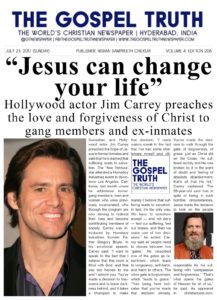 Well, I decided to give him a reason why it might not have gained the attention he thought it deserved.  I proposed the reason his message wasn’t more popular was simply because it was not a new message – nor was it a Christian one.  The message shared by Carrey was the most popular mode of salvation – try harder and work harder. In his message, it centered around suffering leading to two decisions, one leading to resentment, and the other leading to “forgiveness, which leads to grace.”  The Gospel according to Jim Carrey can be best summed up in his own words, “suffering with compassion and with forgiveness, and that’s what opens the gates of heaven for all of us.”  In fact, Carrey’s message is the standard new age mantra which is hardly news worthy.

I don’t fault the Pastor for falling for Carrey’s purposeful deception; I say purposeful because Carrey was speaking with Christians so Carrey wrapped his message in Christianize.  And if we were talking about love, joy, peace, patience, kindness, and goodness in broader cultural terms this conversation would be able to keep a Christian appearance without much harm. Instead, this Pastor and the media are trying to sell this as the Gospel. I pointed all this out to the Pastor and his response was, “No Matter.” Well, now we have a problem.

Because Carrey’s message is NOT the Gospel; it is by definition another gospel.

Why isn’t Carrey’s message the Gospel; he sounded smart, nice, loving, and he used Jesus as a model of suffering and forgiveness – isn’t that the good news?  No.  Basically, what Jim Carrey said was this:  Here is a bridge. Here is how the bridge was built. You too can build a bridge.  Build the bridge, come to the other side.  How is this good news? The world is not short on advice, wisdom, and how-to guides.  And just in case there was a shortage, I started this blog.

What is the Christian Gospel?

This is where the Christian Gospel separates itself from the world of guru’s, life coaches, and actors/artists.  Jesus did not come to provide another guide on how to live life.  He came to save.  And that is exactly what Jesus accomplished.  You see, Jesus’ death, burial, and resurrection, is not a model of salvation, it is the price of salvation that has been paid in full.  There is nothing we can add; nothing we can do to improve it.  Jesus paid the entire debt we owe, to realize this gift is to simply place your faith in Jesus that this sacrifice, HIS sacrifice, is sufficient.  We place our faith in Jesus that He has saved us. Again, not because we deserve it, not because we have earned it, but instead, because God is patient, loving, merciful, and full of grace.  The Gospel is that Jesus did all the work, none of which we could do, and only by trusting in this can we have everlasting fellowship with God.

I am Richard Iddings. I am a sinner saved by the grace and mercy of God; a follower of Jesus, who alone is King and Savior. I stand on the inerrant Word of God as my sole rule of faith. I am also a husband to the best wife in the world and father to the most amazing daughter.

Toggle Sliding Bar Area
"But sanctify Christ as Lord in your hearts, always being ready to make a defense to everyone who asks you to give an account for the hope that is in you, yet with gentleness and reverence." -1 Peter 3:15
EMAIL